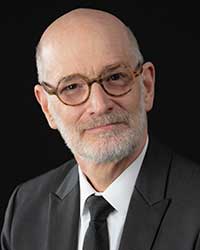 Maestro Laurino enjoys a multi-faceted career as a conductor, violinist, educator, clinician and entrepreneur. He is the principal conductor of the Milwaukee Ballet, conducting the perennial favorite, Nutcracker, for many seasons at the Marcus Center. Maestro Laurino conducted the world premiere of Michael Pink’s Peter Pan and Dorian Grey as well as ballet favorites Romeo and Juliet, Swan Lake, and Coppelia. Guest conducting appearances include the Chicago Chamber Orchestra, the Elmhurst Choral Union, LʼOpera Piccola, Light Opera Works, the Sheboygan Symphony, the Skokie Valley Symphony and the Skylight Opera Theatre. He was named artistic director and conductor of the Racine Symphony Orchestra in 2011.

Born in Brooklyn, N.Y. and trained as a violinist and conductor at the University of Wisconsin-Madison and Indiana University, his principal teachers were Thomas Moore and Franco Gulli.

Pasquale Laurino has performed regularly with the Milwaukee Symphony Orchestra, and he is the former concertmaster of the Milwaukee Ballet Orchestra and the Skylight Opera Theatre. For several years, Mr. Laurino was the conductor of the popular Music Under the Stars series. He served as the artistic director of the chamber orchestra, Sinfonia Concertante, where he led concerts from the concertmaster position. He was appointed conductor and artistic director of the Concord Chamber Orchestra from 1987-92. At the Skylight Opera Theatre, his repertoire ranged from bel canto masterworks Cosi fan Tutte, La Cenerentola, The Barber of Seville, Don Pasquale, The Abduction from the Seraglio and Lucia di Lammermoor to La Boheme and The King and I. In 2002, the Copland opera The Tender Land appeared on PBS with Maestro Laurino conducting and providing commentary during the intermission feature.

In 2004 he conducted the premiere production of Rachel Portmanʼs The Little Prince directed by Francesca Zambello. Long committed to music pedagogy, he has been on the faculty of Carroll College, the Wisconsin Conservatory of Music, and the University of WI- Fox Valley as conductor, violin/viola teacher and as a chamber music coach. Maestro Laurino currently resides in Chicago where he played baroque violin with Ars Antiqua, Baroque Band and Haydn on the Lake. Mr. Laurino has served as concertmaster of the Chicago Opera Theatre, most recently playing the Phillip Glass opera, The Perfect American, with the composer in attendance. He has also served as concertmaster of the Northwest Indiana Symphony, DuPage Opera and the Chicago Chamber Orchestra. Mr. Laurino has participated in numerous festivals in Europe and the States including the Macerata Opera, the Festivale della Valle dʼItria in Italy and the Gent Opera Festival in Belgium. In 2005 he joined the faculty of the Rocky Ridge Music Festival as conductor and violinist. He made his New York City debut playing the solo violin part in A MINISTERʼS WIFE, produced at Lincoln Center. Mr. Laurino is the founder and president of MUSIC IN THE LOOP INC, an musical entertainment provider in the Chicago area.