Posted on: February 15th, 2021 by Racine Symphony Orchestra No Comments

We are thrilled to congratulate our 2021 Young Artists’ Competition Winner, Nolan Boerner! 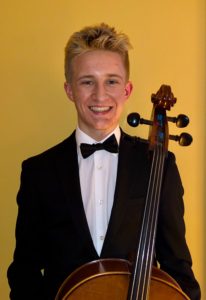 Nolan Boerner is a Sophomore at the Prairie School and has been playing cello since he was 7 years old. He began taking cello lessons with Martha Veto and has continued to study cello, piano and music theory under her tutelage in addition to his current a studies with Scott Cook at the Cello Institute of Milwaukee. Jamie Breiwick instructs Nolan at the Prairie School for orchestra and in the pit orchestra.

Nolan currently plays with the Milwaukee Youth Symphony Orchestra’s Senior Symphony, Chamber Orchestra and Davidson Chamber Ensemble. This past year he performed with the WSMA State High School Honors Orchestra and was the principal cellist for the WSMA Middle Level Honors Orchestra for two years. He regularly competes in the WFMC and WSMA regional and state completions, earning an exemplary performance award three times. He recently received an Honorable Mention for his performance in the 2021 MYSO Concerto Competition.

In non-pandemic years, you can find Nolan playing downtown Racine during First Fridays and at the Starving Artist’s Fair. When he’s not playing music, he enjoys running cross-country and track-and-field for his high school. This past Fall he earned a trip to the Division 3 State cross country meet , finishing 39th out of 113 runners.

Nolan will perform with the Racine Symphony for our Spring Masterworks Livestream Concert Sunday, April 18.